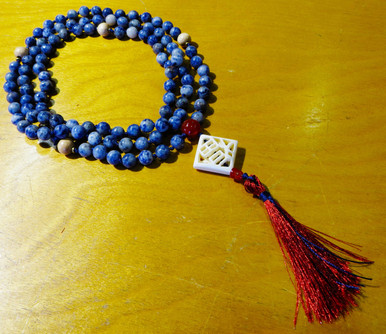 You are the jewel in the lotus!   Your Mala brings you to a focused, quiet, personal, introspective space, mindful of the intentions you want to bring into your life. 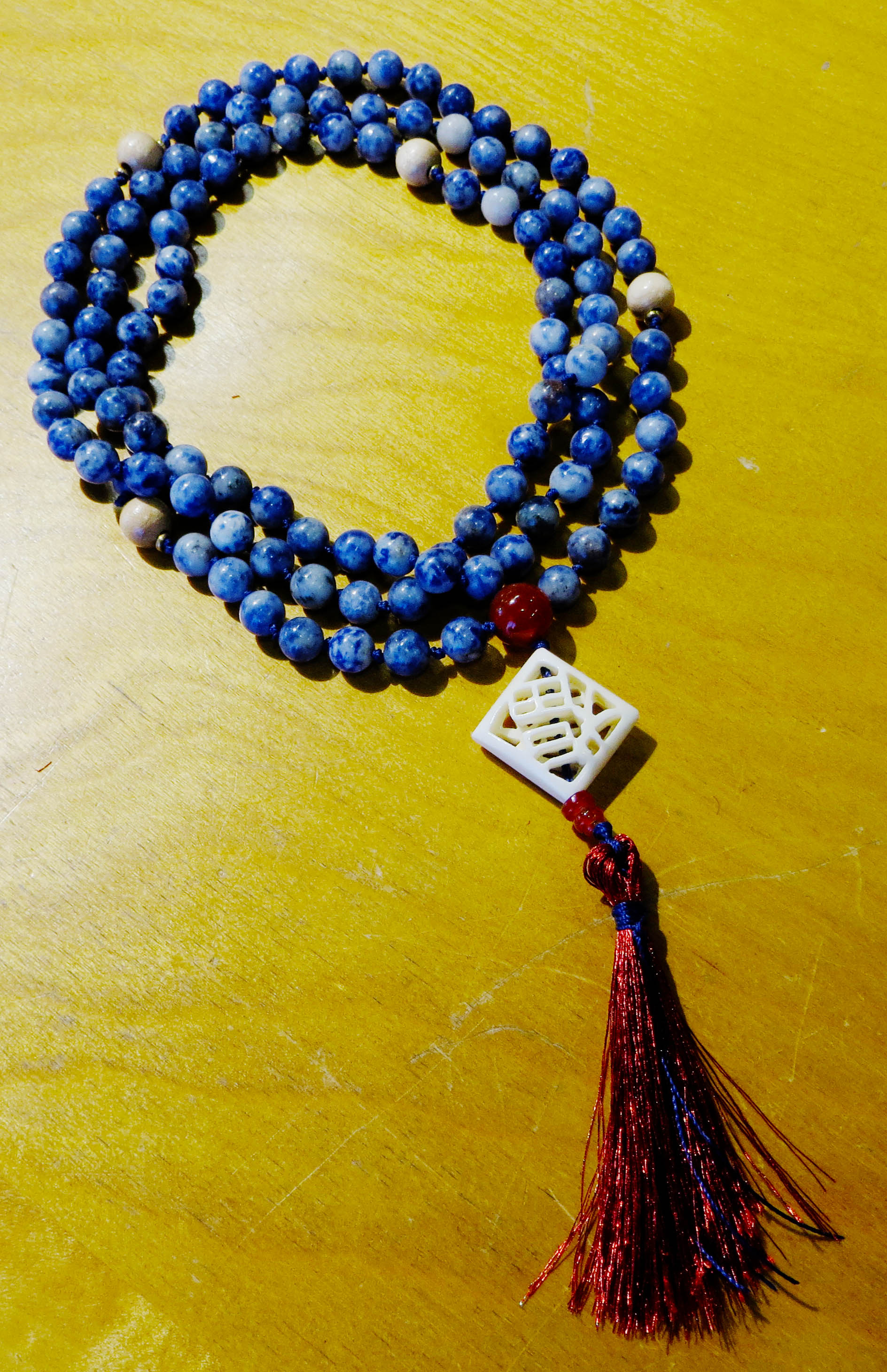 What You Will Learn:
- 2-cord Hand-Knot Tying Approach
- how Malas are made, designed, structured
- how to use the Mala for meditation
- how to use a Guru bead set
- how to make a tassel

Mala Necklaces are widely used in Yoga and Meditation settings.   When constructing a Mala necklace, it is important to be mindful of the intentions you want to bring into your life and focus.

The Mala is used to help keep an accurate count of mantras during medication.

The Mala was first used in the 8th c. BC in India.

Mala beads represent spiritual identity and connection to the universe.   Malas are made up of beads which serve different functions:

Prayer beads (to count and recite mantras)
Marker beads (to create some organization within the Mala and make it easier to keep your
place)
Guru beads (a set of 2 beads, one “Teacher or Mother” bead with 3 holes, and one “Temple or     Tower” bead
Decorative beads (to stylize the Mala)
Tassel (or a pendant drop or fancy knot at the bottom)

There are several design issues when constructing a Mala, and which we will cover in class.   My primary concerns are that the construction (1) respects the Buddhist traditions, and (2) it minimizes the stress on the various components and stringing materials, thus maximizing durability.

It is important that the knots on either side of each prayer bead fit snugly against the bead.   The hole of a bead looks like a broken coke bottle.   We do not want any slack between knots where the bead can ride up and down.   We want minimal rotation of the bead around the knotting cord.   The 2 cords approach works better in achieving this aim.   I have noticed that with the 1-cord approach, designers have difficulty creating good, snug knots consistently along the full length of the Mala. The designer has much more control with the 2 cords approach.

I think it is important to use a Guru bead set.   Functionally, the 3-hole teacher or mother Guru bead allows for a better stringing outcome, than trying to make a 2-hole bead work.   Using a Guru bead is also an appropriate nod to the Buddhist origins and spiritual ideas underlying the Mala.

Most Malas use round beads, between 6mm and 8mm in diameter.   There are no rules, here, however, and you can go smaller or larger.

Sometimes prayer beads are clustered into sets of beads around the Mala, with each set separated by a marker bead.   Traditionally, the marker beads are slightly larger than the prayer beads, but there is no hard and fast rule here.

There is no requirement in Buddhism that the knotting cord be made of a natural material, though many people hold to this belief.   This is a very long item of jewelry with a lot of weight to it.   Natural materials (cotton, hemp, silk, linen), but particularly silk, wear down and deteriorate relatively easily.   This occurs from using the Mala in meditation. It also occurs from exposing the Mala to the environment, which includes pollutants in the air, cosmetics and hair sprays, and body chemicals found in some people’s sweat.

I prefer to use a nylon bead cord as my knotting cord for these reasons.

This is a personal choice.   Some people use a pendant or they create a decorative knot or focal bead.

It is important to use something here to finish off the necklace.

Spiritually, the creation of the tassel to finish off the Mala assists the creator in bringing together all the spiritual forces, some male or female, some water, air, fire, and earth, some sun and moon.   Each strand of the tassel connects us to the divine.

If creating a tassel, this can be made of any material:   silk, cotton, rayon, nylon, horsehair, leather, chain, as some examples.


Traditionally, we do not count the marker beads, only the prayer beads, to get to 108.   If you use 3 marker beads, the total beads in the circle of the necklace will be 111 plus the Guru teacher bead.

I prefer to follow the more traditional practice of starting with the prayer beads and ending with the Guru bead set and tassel.   This lines up better with the spirituality underlying the origin and design of Malas.   The 2-cord through approach offers a lot of control here.

When you start with the Guru bead set and tassel, you have a lot of control over the construction process, and it is much less involved in finishing it off.   The final knot you make will be in the part of the Mala which will rest behind your neck.   You will, however, violate many spiritual design considerations.

It is easy to make a tassel.   The process of making the tassel is very coordinated with the spiritual origins and underpinnings of the Mala.

There are no rules here, and you are free to use as many decorative beads throughout the piece or in the drop.   The only rules:

(2)  You locate decorative beads in the focal drop between the Teacher Guru bead and the Temple Guru bead.   You tie one knot below the Teacher bead, then no more knots until the bottom of the Temple bead.

Traditionally, we use a bead cord to string the beads on, and we tie overhand knots on either side of all our prayer beads.   The knots protect the beads and make the Mala stronger.

Some people do not tie any knots.   Some people string the beads on a cable wire or a length of leather or waxed cotton. rather than a bead cord. Sometimes people will put little seed beads or little spacer beads between each prayer bead instead of tying knots.

There are no rules here, but the more traditional approach will look more appealing, feel more comfortable to wear, and be more durable.

-       Minimizing the use of tools in construction

This product hasn't received any reviews yet. Be the first to review this product!